You are here: Home / Beginner Info / How to Carry a Kayak

Why Learning How to Carry a Kayak is Important

One of the biggest concerns for people who own a kayak is carrying a kayak, which not only includes taking the kayak from one place to another but also lifting and loading it. The difficulty of carrying a kayak is the reason some people don’t kayak as often as they should.

When buying a kayak, some of the most common questions that people ask are: “Is the kayak light enough for me to easily carry? Can I pick up the kayak by myself? Will I have any problems loading it into my car?” People ask these questions because they don’t want to be stuck with an expensive toy that can’t even play with. In other words, they don’t want a kayak that they cannot carry to the place of kayaking.

The good news for all kayak owners is that they can carry, lift, and load their kayak without any problem if they use the right technique for this purpose. You will be able to carry your kayak regardless of its weight easily. You may need to practice the technique a bit in the beginning, but once you get a hold of it, you should have no problem carrying your kayak.

The more you practice, the easier it will get for you to carry your kayak, even if your kayak is complex and heavy to carry at first. A word of advice would be that carrying a kayak won’t be easy at first. So, you will need to show some perseverance to start. However, after a while, the thing will start to come naturally to you, and carrying your kayak will become a breeze.

How to Carry a Kayak

How do I carry my kayak? What is the safest way to carry it?

These are some of the questions that you may have in your mind right now, and we’re glad that you have. This is because it can be tricky and even dangerous to lift and carry a kayak if you have no knowledge about or previous experience of carrying a kayak.

Until you know the basics of transporting a kayak from one point to another, you should not attempt to carry it. This is for your safety, as carrying the kayak the wrong way can injure you. However, once you know the right techniques for carrying a kayak and have practiced them in your backyard, you will be ready to carry your kayak to the place of kayaking. So, what are the right ways to carry a kayak? We discuss them next.

Carrying a Kayak Solo or By Yourself

If you have to carry your kayak by yourself, then you can do it in the following steps.

Step 2: Use Your Legs

Carrying a Kayak with Two People

Carrying this kayak in this position will allow you to carry it safely to the water or load it onto a roof rack. However, you must make sure that the person in the front of the kayak communicates any obstacles to the person at the back.

Tips for Carrying a Kayak

By now, you know how to carry a kayak solo as well as with two people. However, you can more effectively carry the kayak while minimizing your risk of related injury by using the following tips:

Kayak Carts are an Option

While we have provided you with all the information you need on how to carry a kayak, you can skip all the trouble by getting a kayak cart. Ideal for longer distances, kayak carts are attachments with two wheels that you can slide onto the center of your kayak or one of its ends.

The kayak cart works very much like a wheelbarrow, relieving you of much of the responsibility of carrying the kayak’s weight. Another great thing about kayak carts is that they can be easily assembled and disassembled while allows you to tuck them into your kayak while you paddle.

As detailed above, there are a few different ways in which you carry a kayak. The right method for carrying a kayak depends on how many people are involved and the distance that needs to be covered. Therefore, you should pick a technique for carrying your kayak based on the distance you need to travel and whether or not you have help.

Chris is an avid kayaker who likes to spend time in new waters, trying new types of techniques. He loves to bring his dog, Charlie, along for the ride, too :). When he's not kayaking, he's working in a local shop and sharing ideas, tips, and best practices with people on Kayak Love. 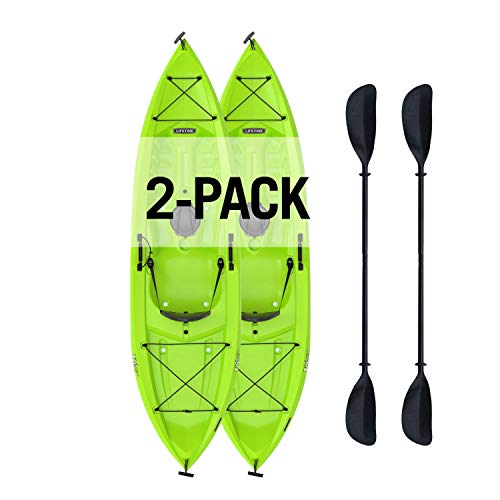